Fire in the sky: Nearly 1,000 injured as meteor falls in Russia 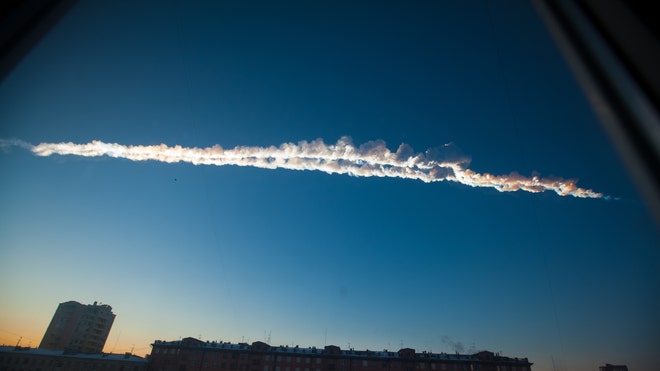 Meteor Streaks across Sky and Exploded

The Interior Ministry said 985 people sought medical care after the shock wave and 44 of them were hospitalized. Most of the injuries were caused by flying glass, it said.
There was no immediate word on any deaths or anyone struck by space fragments.
Meteors typically cause sizeable sonic booms when they enter the atmosphere because they are traveling so much faster than the speed of sound. Injuries on the scale reported Friday, however, are extraordinarily rare.
“I went to see what that flash in the sky was about,” recalled resident Marat Lobkovsky. “And then the window glass shattered, bouncing back on me. My beard was cut open, but not deep. They patched me up. It’s OK now.”
Another resident, Valya Kazakov, said some elderly women in his neighborhood started crying out that the world was ending.
Lessons had just started at Chelyabinsk schools when the meteor exploded, and officials said 204 schoolchildren were among those injured.
Yekaterina Melikhova, a high school student whose nose was bloody and whose upper lip was covered with a bandage, said she was in her geography class when they saw a bright light outside.
“After the flash, nothing happened for about three minutes. Then we rushed outdoors. I was not alone, I was there with Katya. The door was made of glass, a shock wave made it hit us,” she said.

This entry was posted in FirePolice Training, Hit on the Streets, Uncategorized, Videos of Crashes. Bookmark the permalink.